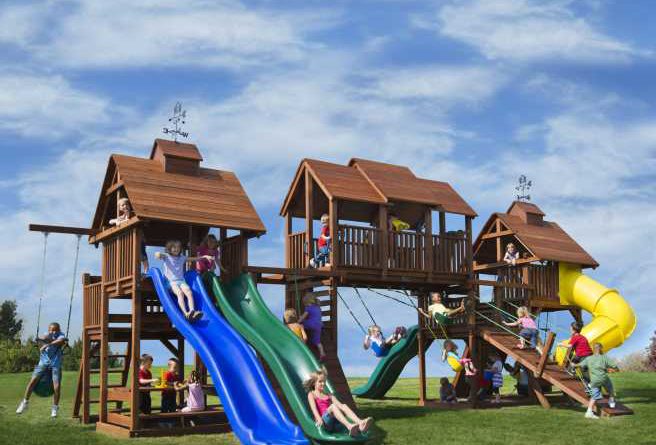 Backyard Products, which moved its plant to Monroe from Warren 10 years ago, continues to expand its market and products.

The business at 1000 Ternes Dr. makes storage sheds and backyard play systems has grown significantly over the past decade, said Nick Nagy, chief operating officer for the company. The company is No. 1 in making wooden storage sheds.

“Our sales have grown over 160 percent in the last 10 years,” Nagy said. “Both in organic growth and growth through acquisitions. We produce more wood storage sheds than anyone in North America — over 100,000 sheds a year. And they are all made in Monroe.”

All of the sheds are manufactured at the more than 200,000-square-foot Monroe plant that serves as its headquarters. And much of the raw materials are obtained from other Michigan businesses, he said.

The firm that started in 1975 also has manufacturing facilities in Janesville, Wis.; Boulder, Colo., and Canton, Ga. It has 33 company-owned branch locations across the nation, with many of these branches selling its product installation services.

Thomas Van der Meulen, chief executive officer, moved the company to a former Lear automotive seating plant in Monroe that closed in 2004. He moved the firm after outgrowing its Warren facility. The company’s decision to consolidate operations in Monroe bucked an economic trend to shed workers and shutter plants in Michigan.

The company employs 420 people, including 165 people at the Monroe plant.

Among its acquisitions were:

Play Nation (and Gorilla Play Sets) is the firm’s most recent acquisition, having occurred in early September (http://www.playnation.com), (https://gorillaplaysets.com/all-swing-sets/).

With its most recent acquisition, Backyard Products is today the No. 2 company in residential playsets for backyards, Nagy said.

“We also manufacture and market pergolas, gazebos and ADUs (accessory dwelling units — studio shed),” he said. “We have a whole network of consumer brands and a lot of moving parts.”

Despite its recent success, the company is not resting on its laurels.

“Installed fencing and accessory dwelling units are emerging categories for us,” he said. “We have launched the fencing in eight of our 33 branches across the country. Accessory buildings are a really growing segment, a more economical alternative to a house addition or lot.”

Among its customers for the installed fencing are Lowe’s, Costco and Home Depot.